Located in the northwestern part of New Mexico, Ah-shi-sle-pah is one of the more remote treasures of the San Juan Basin. Multicolored badlands, funny-shaped spires, eroded sandstone hoodoos and unique geological formations – anybody who has fallen in love with the lunar landscape of the Bisti Badlands or De-Na-Zin Wilderness will love this place. Although there are many similarities between them, Ah-shi-sle-pah has some peculiarities and a magic all its own. It’s a land of yellow cap rocks and scenic ochre or olive colored bentonite hills – beautiful and soft colors hardly seen elsewhere!

Due to its geological and paleontologic values, a stretch of the broad Ah-shi-sle-pah Wash (formerly known as “Meyer´s Creek“) and its southern branch were designated as Wilderness Study Area (WSA) in May 1992. This unit encloses an area of about 26,5 km² and is located in the arid Greater Bisti Complex between the Bisti Wilderness and Chaco Canyon National Historical Park. It’s a premier location for scientists and it was prospected by world renowned dinosaur hunter Charles Hazelius Sternberg in the summer of 1921. The highlights of his collection are shown at the Museum of Evolution in Sweden – among them skulls and bones from 75 million years old late Cretaceous dinosaurs, crocodiles and turtles.

Ah shi sle pah has not changed much since Sternberg explored it. Even today, in some parts of the wash, you will be able to spot bone fragments. They resemble petrified wood, but their honeycomb-like structure distinguishes them. Scientists, such as field paleontologist Robert Sullivan, continue to search for bones, skulls, teeth and whole skeletons of the ancient beasts buried in the mud hills. Over 280 specimens of fossil vertebrates have been isolated from the sedimentary Kirtland and Fruitland Formation and are now exhibited at the New Mexico Museum of History and Science in Albuquerque and at the State Museum of Pennsylvania.

The first time Steffen and I had the opportunity to visit Ah-shi-sle-pah was in October 2006. The weather wasn’t good back then, but the scenery was so impressive that we decided we had to come back as soon as possible. We ventured out there again in October 2007 and spent two days at this remote place shooting many pictures and rediscovering the “mushroom cities” and petrified stumps. It amazes me how the stumps look as if the trees were cut down just a couple of weeks ago. The uplift position and their large petrified roots make them quite unique. 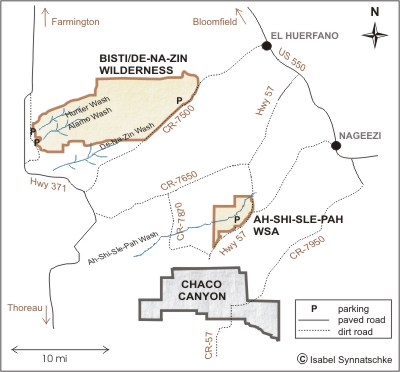 How to get there: The Ah-shi-sle-pah WSA is located 60 mi south of Farmington or Bloomfield. It’s an 1.5 hour’s one way drive, first along Hwy 371 until milepost 61 then following CR-7650 for 7.8 miles. Turn right onto CR-7870. After another 9.4 mi you’ll arrive at the junction with Hwy 57. Turn left and 2.8 mi further down look for a track leaving the road on the left side. Leave your car here at 36.139597, -107.920863 and follow the trail for 0.6 mi to 36.147611, -107.919082, where the old official parking place was located during our first visit (it changed in 2011!). And from there head straight further north up to the rim. The trail is not marked on common topographic maps, but you can easily find it on Google Earth.
When coming from Farmington you’ll need to drive 20.5 miles on dirt roads. But CR-7650 and CR-7870 are usually passable for normal passenger cars and well maintained since they are regularly used by the big trucks of the Bisti Oil Field. Nevertheless be aware that these roads can easily turn into a “mud trap” after heavy rains.
Ah-shi-sle-pah can also be accessed from the East. Head south on Hwy 550 from Bloomfield, turn right on Hwy 57 at the Blanco Trading Post (mile marker 123.2) and continue southwest for more or less 18 miles until you reach the unsigned track to Ah-Shi-Sle-Pah on your right hand side.
Check out our Ah-shi-sle-pah topo map for directions, more GPS waypoints and GPX-track.

What to see: Most of the Ah-shi-sle-pah Wash is rather boring, just gray and barren land without any hoodoos or other unique rock features. But there are some really amazing spots along the southern edge of the wash near the parking lot. If you head north you’ll soon reach the rim and look at the first small hoodoo city. It’s not easy to find your way down to the wash here. If you continue your hike along the rim to your left side there is much to see on the next 1.5 miles. But try to get down to the wash somewhere otherwise you’ll miss Sternberg’s “Palmetto Hoodoo” site, the rounded stones of “Rock Garden” and less than a mile to the west there is our personal highlight, the “Yellow Hoodoo Gang” (named by Steffen; 36.151017, -107.931419).
You can also explore the eastern part of Ah-shi-sle-pah wash. It is less colorful and looks more like the Bisti Badlands, but nevertheless you might find some nice-shaped gray cap rocks over there too. And I’m pretty sure that for hoodoo aficionados this adventure won’t be in vain either! ;-)

Pictures: There are more pictures in our Ah-shi-sle-pah Wilderness album.

Animals: Rabbits and lizards are common sights in Ah-shi-sle-pah, but unfortunately we didn’t meet any of the beautiful collared lizards. Neither did we see one of the eagles or endangered ferruginous hawks that nest in this undeveloped landscape. Be also aware of rattlesnakes!

Plants: Vegetation is scarce at Ah-shi-sle-pah. Most of the hills are covered with mud interspersed with a few yuccas, sagebrush, saltbrush and grasslands.

Important advice: Any kind of fossil collecting is prohibited by law. Leave nothing but footprints take nothing but pictures (and time

)! And bring along a topomap and – if available – a GPS device so you won´t get lost. It´s a truly wilderness experience!

Last but not least the gink to a good paleontology museum: www.nmnaturalhistory.org